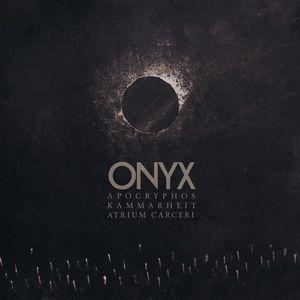 Content: “Onyx” resulted from the common efforts of Robert C. Kozletsky (Apocryphos), Pär Boström (Kammarheit) and Simon Heath (Atrium Carceri). Cryo Chamber seems to like the idea of dark-ambient artists working together, this way getting all their very personal skills into a higher work. The conceptual “Cthulhu”-album was collaboration between multiple artists (12), however we only get 3 artists on “Onyx”.

All of those artists have been quite prolific this year, but this album for sure must be something really special. It doesn’t really sound like one of the musicians put his stamp more than another one on “Onyx”. It feels like a fully complementary work dealing with dark sound manipulations and appealing for freaky visual themes. This work is meant as a ‘soundscape journey related to the reflection of dispirited memories and obscure sorrows felt by mankind’.

It all starts off rather sober and quiet with “Immemorial” revealing a pure soundscape approach refined by piano arrangements. “Once Atop The Unknown” coming up next brings us to the epicenter of this dark trip. I here especially like the overwhelming sonic waves joined by a few delicate noises.

We next again join quieter, but still chilling passages of pure soundscape music. The writing hides different little noises and arrangements reinforcing the cinematographic appeal of the work.

“A Lonely Strain” feels like you are getting lost in a strange and frigorific astral dimension. This cut is filled with a strong imagery created by your own emotions and leading you to explore the most perverted parts of your inner self.

And at this point, it all seems just like a teaser. “Aphotic” is without a shadow of a doubt the dark jewel of this frightening “Onyx”. The writing moves towards a crescendo, a bit like a predator waiting patiently for the ultimate moment to catch its prey. You here will get the impression to have reached one of the darkest experiences in life!

This track for sure appears to be the ultimate level of fright featured on “Onyx”, but the rest of the work holds on to the chilling production. It sometimes moves a bit more into a kind of ghost-music (cf. “A Pale Sign Revealed”) experience, which is once more accentuating the visual strength of the work, but it also becomes less tormenting.

From a pure musical point of view you don’t really feel like this album was made by three different artists. “Onyx” reflects an impressive knowledge and maturity giving you the impression they simply have been involved in the same band for years and years.

Conclusion: “Onyx” is a successful opus, which I hope will incite those artists to consider a new voyage throughout the darkest realms of dark-ambient music.

Best songs: “Aphotic”, “A Lonely Strain”, “Night So Close To The Tongue”, “Cavern Of Igneous Flame”.