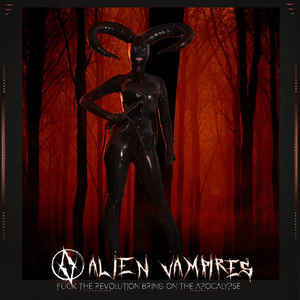 Background/Info: ‘Nysrok Infernalien’ and ‘Nightstalker’ are back on track preparing their upcoming full length “London Paranormal” announced for early 2019. No better way than releasing an EP with new songs, but next to this new work there also is the ‘twins-EP’ entitled “Evil Twins”.

Content: This is an opportunity to discover 4 new songs by Alien Vampires. The influences are diversified, revealing a more eclectic approach in sound. From the heavy, dark-electro and industrial-like “Bring On The Apocalypse” to the more melodic and accessible “Ready To Die” to the hard-banging industrial-rave driven “Hyperbolic Doubt” featuring Chainreactor this EP has a lot to offer.

The original version of the last new song entitled “Fuck Borders” is available at the “Evil Twins”-EP, but you here get remixes by Studio-X and Venal Flesh. Other remixes from songs originally featured have been provided by Acylum, Synapsyche and DKAG.

+ + + : The songs are diversified, which I think is a good thing. The Alien Vampire fans are going to love “Bring On The Apocalypse” for its merciless, industrial style. The more melodic “Ready To Die” sounds as one of the band’s ‘sweetest’ cuts, but it remains a great danceable track. Among the remixes I especially like the obscure and tormenting Acylum remix of “Bring On The Apocalypse” while new Alfa Matrix band Synapsyche did a good job remixing “Ready To Die”.

– – – : Some of the remixes are very different from the traditional Alien Vampires-style and I especially refer to the techno-driven remix by DKAG. But at the other side that’s also the goal of remixes, isn’t it? This is the perfect stuff for DJ’s.

Conclusion: Alien Vampires are back and they’re still driven by provocation and merciless electronics. The new cuts smell like they’re announcing a great new album.

Since you’re here … … we have a small favour to ask. More people are reading Side-Line Magazine than ever but advertising revenues across the media are falling fast. And unlike many news organisations, we haven’t put up a paywall – we want to keep our journalism as open as we can. So you can see why we need to ask for your help. Side-Line’s independent journalism takes a lot of time, money and hard work to produce. But we do it because we want to push the artists we like and who are equally fighting to survive. If everyone who reads our reporting, who likes it, helps fund it, our future would be much more secure. For as little as 5 US$, you can support Side-Line Magazine – and it only takes a minute. Thank you. The donations are safely powered by Paypal.
Tags: Acylum, Alien Vampires, Chainreactor, Studio-X, Synapsyche