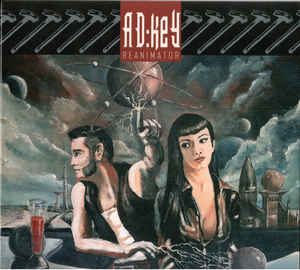 Background/Info: Rene and Andrea Nowotny are back on track unleashing the fifth opus of AD:Key. The German duo stands for 100% true EBM and have released albums on Electric Tremor Dessau and Emmo.biz. Alfa Matrix has caught a big fish, this band definitely belonging to the top level of EBM over the past few years.

+ + + : AD:Key is much more than simple EBM. It’s a well-crafted and powerful sound accomplished with noticeable little bleeps, carrying bass lines and elevating choruses. There’s a cool match between the sterile, but sexy female vocals and the harder male ones. I also like a kind of funny aspect running through their work. Just pay attention for the song “never Enough” featuring simplistic English lyrics with a little wink to The Rolling Stones universal rock hit “Satisfaction”. “Reanimator” stands for non-stop EBM power and multiple cool songs.

Among the remixes I especially want to recommend the groovy version of “Mein Weg” remixed by Robotiko Rejekto. Other noticeable cuts have been featured by The Psychic Force, Amnistia and Decoded Feedback.

– – – : The only regret I have with “Reanimator” is that the album is missing the ultimate hit. We get an impressive number of cool songs instead so in the end you don’t hear me complaining.

Conclusion: AD:Key reinforces the EBM troops of Alfa Matrix, but it first of all is one of the most successful contemporary bands in the genre. “Reanimator” will make your body move, that’s for sure!