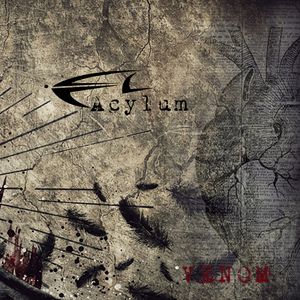 Content: The earlier this year released album “Pest” is still taking the electro underground planet by storm, but Acylum is already started on a new deadly road. This new assault is made of 2 EP’s that have been released nearly simultenuously.

The first strike is called “Venom” revealing a completely new song. This song features the brutal and merciless electro-industrial approach of Pedro Engel. It’s a tortured piece of electronics, which once again will not leave you unaffected. Acylym more and more sounds like the new and contemporary version of :Wumpscut:. But if this band will move on taking the scene by surprise releasing new masterpiece they’ll rapidly leave :W: far behind becoming one of the hottest formations in the genre.

“Venom” indeed is a new masterpiece, which sounds a bit in the line of the mega-hit “Zigeunerjunge” (released on “Pest”). It sounds hard and merciless featuring a perfect twist between dark-electronics and distorted industrial sounds plus passages revealing great mystical chants. The production has been accomplished by spooky vocals sung in English and refined by icy, tormenting bleeps and arrangements.

We next get 8 remixes of “Venom” by very different formations offering a rather diversified interpretation of the title song. The most noticeable remixes have been accomplished by the totally unknown DJ Ele transforming “Venom” into a hard piece of clubby-sounding electro-industrial music and a remix by Bewitched. This band is a Scandinavian metal formation, which reworked “Venom” a furious and tormenting way –and not at all in a metal way, while accentuating the mystic passage of the song.

New label mates The Psychic Force made a cool remix as well. One of the most noticeable bands is Advent Resilience, which sounds like a direct link with the great :Wumpscut: as well. This band indeed already accomplished multiple remixes for Rudy R and the least I can say is that the last remixes I’ve heard were pretty efficient. The remix of “Venom” sounds a bit minimal- and experimental-like as well, but it’s a great and creative exposure made by a talented artist.

I can’t say that the few remixes left are not interesting, but they remain in the shadow of the aforementioned versions. So the last song to pay some attention to is an exclusive song featuring Carlos Ruiz (formerly active in Dioxyde and now running Asseptic Room). “Sueños Rotos” sounds like another hard-industrial sounding electro cut driven by Spanish vocals.

Conclusion: Acylum already accomplished a successful new EP revealing one great new title-song, one cool exclusive B-track and multiple efficient remixes. Acylum simply is one of the hottest dark-electro formations of the moment.