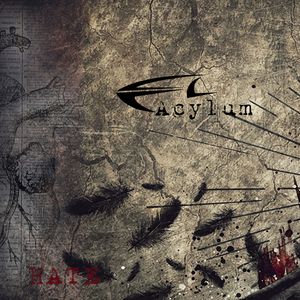 Content: This newest EP by Acylum has been released nearly at the same time of the “Venom”-EP. “Venom” revealed a completely new song plus an extra exclusive track while “Hate” brings you back to the dark inferno of the “Pest”-full length.

The main song “Born To Be Hated” was reconstructed into a so-called “Shot Two”, which remains pretty faithful to the raw electro-industrial Acylum sound. It all sounds brutal and harsh, which is an element you once again will discover in the production of the vocals. It’s an overwhelming dark-electro style, which is highly danceable, but still influenced by a sort of tormented layer. Acylum is the kind of band that can’t leave you unmoved.

“Born To B Hated” was remixed on this EP by 4 different formations, which each have tried to inject their own touch to the song. Xentrifuge and First Black Pope both did it a rather familiar dark-electro and industrial way, and both of the remixes are pretty well-crafted.

The biggest surprises were accomplished by a more clubby-danceable remix of Simon Carter and totally transformed and impressive work of Venal Flesh. The remix of Venal Flesh really deserves a special mention for their creative work.

The few remixes left are also songs that were originally released on the last album. The “Pest” song was remixed by two bands, but I here especially noticed the amazing work by Llumen. This new-signed Alfa-Matrix band transformed the original song into a modern dark cut with vague technoid elements and a kind of avant-garde approach.

“My Knife” was remixes by two different bands as well and I here especially recommended the brilliant and somewhat body-minded remix by VV303.

Conclusion: “Hate” reveals not as many surprises compared to “Venom”, but a few remixes transposing the original songs into a new approach and sound dimension are worthy of examination.

Since you’re here … … we have a small favour to ask. More people are reading Side-Line Magazine than ever but advertising revenues across the media are falling fast. And unlike many news organisations, we haven’t put up a paywall – we want to keep our journalism as open as we can. So you can see why we need to ask for your help. Side-Line’s independent journalism takes a lot of time, money and hard work to produce. But we do it because we want to push the artists we like and who are equally fighting to survive. If everyone who reads our reporting, who likes it, helps fund it, our future would be much more secure. For as little as 5 US$, you can support Side-Line Magazine – and it only takes a minute. Thank you. The donations are safely powered by Paypal.
Tags: Acylum