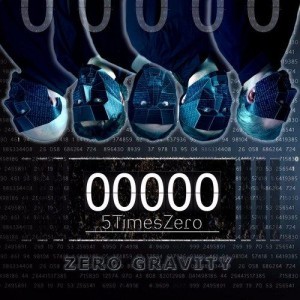 Background/Info: 5TimesZero is a German band consisting of 5 members. “Zero Gravity” seems to be their debut release featuring 4 songs.

Content: I recognize a rather typical German electro-body-pop sound, which reminds me now and then to And One. The songs have been composed with alluring and rather EBM-minded bass lines and mixed with a rather heavy and blasting sound production. Even on a softer cut you’ll notice the deep, vibrating sound treatments carried by professional production work.

5TimesZero also reveals great vocals and that’s an interesting item as 2 singers are active on this EP. I especially refer to the charismatic vocal parts on “Hunter’s Snow”.

+ + + : This EP reveals 4 different songs, which makes it more interesting than the usual maxi featuring numerous remixes. All of the songs –even the last instrumental, are pretty enjoyable cuts revealing great production work.

Conclusion: This is a noticeable debut although I’m convinced that there’s much more potential hiding inside this band than what has come out thus far. So let’s keep an eye on this band.