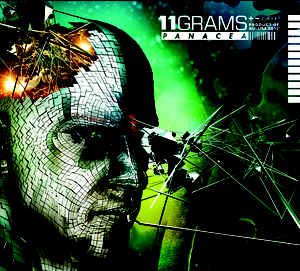 Background/Info: 11Grams is the meeting between American Rob Early (Retrogramme) and Australian Simeon Fitzpatrick (Project K11). They released a few digital EP’s, but the consecration at the end of 2017 has been this official debut album released on EK Product.

Content: 11Grams deals with a sophisticated and diversified format of EBM. It’s not the typical old-school hard-core body music, but a mix of dynamic rhythms, intelligent sound sculptures, bombastic passages and darker atmospheres.

Daniel Myer (Haujobb, Architect) contributed to this album by a superb version of “The Stalker” while there also is a noticeable remix by Atropine and Xavier Swafford (3Teeth, Impulse Control). Notice by the way several guest singers and musicians have been invited to achieve this work.

+ + + : I like the intelligence of this work revealing a more sophisticated EBM format. The diversity is quite exciting and probably due to the different guest artists. Daniel Myer’s version of “Stalker” is an amazing piece of astral body music. But I also have to mention the elaborated “Synthetic 3.5” revealing an interesting contrast between the sexy, female vocals by Lisa P. Duse and the bombastic arrangements. Atropine also made a great remix of “Machine Malfunction”, which reminds me of the obscurity of Vomito Negro.

– – – : “Panacea” is not the most accessible work in EBM land. It’s ‘difficult’ music, which I’m afraid will not appeal to the hard-core lovers, but probably would be enjoyable to music lovers in search of something more personal and unique.

Conclusion: “Panacea” has accomplished a rather atypical EBM format revealing the band’s creativity, but still great writing skills (with the help of some guests).