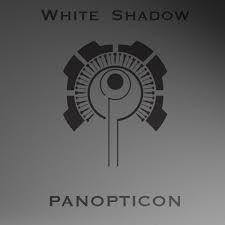 Content: The 4th full length by the Baltimore (USA) based White Shadow features 13 songs and has been inspired by the ‘Panopticon’ concept of the English philosopher and social theorist Jeremy Bantham. His theory reminds me a bit of George Orwell, but it will lead us too far analyzing the concept of Bantham.

Let’s concentrate on the music featured on “Panopticon.” White Shadow clearly deals with a unique approach to metal music, which is mainly characterized by furious guitar parts. It now and then makes me think of a crossover between Metallica and Type O Negative while the electronic treatments clearly inject a unique and personalized touch. There’s a nice twist between the powered guitar and electronic arrangements. But the album still features a few more surprises like alluring choruses and captivating vocals by front man DXNero.

The debut part of the opus is mainly characterized by the impressive “Zugzwang”, which brings all different elements and influences together in a powerful outburst. The 2nd part of the album features a few more attention grabbers, but I have a preference for “10.000 Masks” and “Panopticon (Suite. Pt. 1)”. Both songs show the harder sides of this work, sometimes making me think of a sort of nu-metal music.

“Panopticon” also reveals a few quieter pieces, which more appear to be little breaks in between the heavy tracks. This is not my favorite part of the work although I have to admit that, “Six Months Of Sundays (Suite. Pt. 2)” is a well-crafted cut animated by piano parts right in the beginning while showing an emotional side during the song.

Conclusion: “Panopticon” is a cool work on which I was especially impressed by the furious metal side.