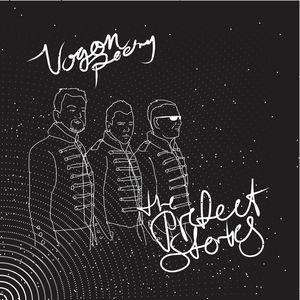 Content: The last year debut full length (cf. “Don’t Panic”) by Vogon Poetry showed an interesting and somewhat minimal approach in electro-pop. I enjoyed this work for its personal approach and so I was wondering what the new songs would sound like.

No doubt about it, the minimal touch still hangs over the album. Vogon Poetry doesn’t satisfy themselves emulating good-old electro-pop standards, but tries to inject its own stamp to this genre. It directly comes through on the opening song, which merges synth-pop aspects together with dark and minimal electro-wave ingredients. There’s a solid bass line running through the song while the vocals have an exciting androgenic touch.

“Never Too Late” was released as the EP-title song, which is a rather logical choice. This is a pretty cool song and totally adapted to rather common electro-pop standards. “Spit It Out” coming up next is a rather surprising cover version and is one of my personal IAMX-songs. You’ll recognize the original version, which has been empowered by an EBM-minded kick. Vogon Poetry didn’t try to emulate the song, but reworked it in thier unique style. It’s a quite exciting version, but maybe the kind of song that better fits to a live performance.

The next few songs get back to some 80s influences reminding me of Erasure and even Depeche Mode, but always accomplished with this typical minimal –and somewhat experimental approach.

“Hyperspace Bypass” is a noticeable cut in the genre.
The most noticeable song appears at the final part of the work. “Afraid” probably stands for the best song of the Swedish formation. They pumped up the composition by a harder dance kick, but it’s the trance-pop approach which mainly caught my attention. There’s a cool progression running through the song, which is made by cool sequences and fine bleeps moving crescendo towards a great finale. This song mixes power and delicacy. The refined bleeps come through once more on the last song “Virtues”.

Conclusion: “The Prefect Stories” is an interesting piece of electro-pop, which sounds like an imaginary bridge between early electro-pop influences and more contemporary, minimal elements.