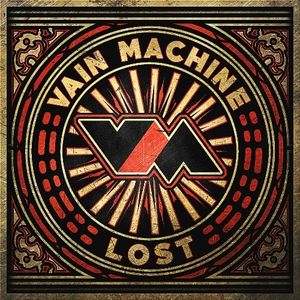 Content: Vain Machine saw the light of day in 2013. Based in Los Angeles, Beau Baker and Omar Quinones signed to the promising UK label Analogue Trash Records to first unleash a digital EP followed by this debut full length album.

The first tracks clearly reveal an electro-pop membership, but achieved by some harder elements like EBM and even industrial music. The duo claims to be inspired by many big names, but I especially recognize a sound formula reminding me of Mesh. It doesn’t mean that “Lost” sounds like a Mesh emulation as Vain Machine sounds harder and rougher. Some of the arrangements and even vocal passages remind me of the carrying pop format of Mesh, but this band reveals a tough and sometimes unpolished production, which makes it a bit industrial-like. Just pay attention for “So Much For Fate (All For Nothing)” and you’ll maybe seize the link.

I also like the multiple sound manipulations, Vain Machine appearing to be passionate sound alchemists. “Strike The Wire” is a remarkable song in the genre, revealing an elaborated and intelligent writing mixed with power. The first three songs are sensational pieces of modern electronics.

The next few tracks are just cool, but there are less highlights here. It remains easy listening and fully enjoyable electro-pop finally leading towards two more noticeable songs. “Broken” clearly sounds inspired by future-pop while “Push” is another impressive piece bringing us back into harder and darker body-pop fields.

“Lost” features seven songs and five remixes. The remix of “Broken” by Assemblage 23 is probably not a coincidence. The remix is cool, but I prefer the original version. My personal favorite remix is, “Strike The Wire” by People Theatre. This French project already made several noticeable remixes and again deserves a special mention here for the global creativity of the remix. The three remixes left don’t really add a bonus to the work. I personally expected a bit more out of Ruined Conflict.

Conclusion: “Lost” is a cool album accomplished by a promising band revealing a different approach in electro-pop music.