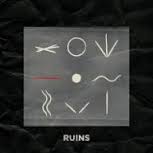 Content: We here welcome a young Belgian formation, which was set up in 2013. They first released an EP followed by a single and next started working at their official debut full length released by the Belgian label Consouling Sounds.

I honestly never heard of this band before and I didn’t know what to expect. “Ruins” is not exactly groundbreaking, but it can be a solid basis for further releases. The opening song is not fully representative although it’s a fully enjoyable and somewhat cinematographic composition lead by female- and male vocals.

“Silver” clearly indicates the main influences of the band, which will appeal to all lovers of Portishead. This is a cool composition revealing delicacy and sound emotions. The writing is delicate while reinforced by the sensitive and poignant playing of cello. The female vocals feel like expressing real suffer, which perfectly matches with the global sound format. I also like the complexity and progression of this song, which reveals a perfect balance between guitar, bass, cello, drums and electronics.

“The Creek” confirms the Portishead-inspiration although the rhythm sometimes sounds a bit jazzy as well. This song would be the right cut for a soundtrack. The Girl Who Cried Wolf is not exactly into innovation, but their trip-pop inspired sound merged with deeply cinematographic passages appears to be a delightful piece of moody music.

Some passages are more into bombastic elements and deep resonating bass lines, which are accentuating the darker side of the band. “Ruins” is not exactly what I would call happy music although it has a delicious dreamy feeling coming through at “This Is Me” revealing impressive sorrow-like guitar parts. A low resonating bass comes back again on “Black Vipers”.

The last song “Shipwrecked” is more into guitar although the somewhat crystal-like electronic arrangements are absolutely essential here. This is one more beautiful song giving us full satisfaction. I’m maybe missing a kind of absolute hit, which would have made this album outstanding.

Conclusion: This is more than a promising debut album and I’m sure this band could become a new standard in the wider fields of trip-pop music.

Since you’re here … … we have a small favour to ask. More people are reading Side-Line Magazine than ever but advertising revenues across the media are falling fast. And unlike many news organisations, we haven’t put up a paywall – we want to keep our journalism as open as we can. So you can see why we need to ask for your help. Side-Line’s independent journalism takes a lot of time, money and hard work to produce. But we do it because we want to push the artists we like and who are equally fighting to survive. If everyone who reads our reporting, who likes it, helps fund it, our future would be much more secure. For as little as 5 US$, you can support Side-Line Magazine – and it only takes a minute. Thank you. The donations are safely powered by Paypal.
Tags: The Girl Who Cried Wolf