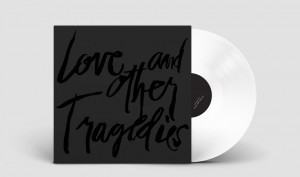 The Cure’s Roger O’Donnell has written and performed on the album “Love and Other Tragedies” that is inspired by several classical stories alongside cellist Julia Kent of Anthony and the Johnsons and which has been almost 3 years in the making. The release is not all that surprising, the keyboard player with The Cure has spent most of the last five years composing for orchestral strings, ranging in size from the Wurttemberg Chamber Orchestra (The Bernhard Suite) to this his most recent work written for the cellist Julia Kent, “Love and Other Tragedies”.

Each piece on the album is written for piano and two to four cellos, all of which are played by Julia. The music was written in O’Donnell’s studio in England’s rural Devon. Julia recorded the parts in her home studio in New York. Once the recordings were finished, Paul Corkett mixed the songs and then mastered them in London with Guy Davie. The tracks have been cut to heavyweight vinyl and are presented in gatefold format with art work by constant collaborator Anna Dorfman. The inside cover photograph was taken by Australian photographer Romain Duquesne and realised by the artist Jodee Knowles.

The duo met when O’Donnell was asked to write a new version of the story of Scheherazade for the Post Romantic Empire project of Italian, Giulio Di Mauro. They collaborated on the suite written in three movements by Roger for piano and four cellos and decided to explore this liaison further.

Julia Kent might be less known to many of you, after years spent performing and recording with other artists and groups, among them Anthony and the Johnsons and all female cello group Rasputina, Canadian-born, New York City-based Julia Kent released her solo debut “Delay”. Kent toured extensively in support of the album throughout Europe and North America and subsequently released an EP “Last Day in July”.

In “Green and Grey”, her following solo record, she continued to use looped and layered cello, electronics, and field recordings. Kent’s last record “Character” was released by The Leaf Label in March 2013. Julia Kent has composed a number of original film scores, as well as music for theatre and dance performances. She continues to tour extensively and is currently composing for television and film.

Since you’re here … … we have a small favour to ask. More people are reading Side-Line Magazine than ever but advertising revenues across the media are falling fast. And unlike many news organisations, we haven’t put up a paywall – we want to keep our journalism as open as we can. So you can see why we need to ask for your help. Side-Line’s independent journalism takes a lot of time, money and hard work to produce. But we do it because we want to push the artists we like and who are equally fighting to survive. If everyone who reads our reporting, who likes it, helps fund it, our future would be much more secure. For as little as 5 US$, you can support Side-Line Magazine – and it only takes a minute. Thank you. The donations are safely powered by Paypal.
Tags: Guy Davie, Julia Kent, Paul Corkett, Roger O'Donnell, The Cure