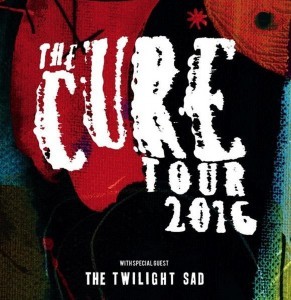 The Cure will hit the US roads in 2016, supported by Scottish dreampop act The Twilight Sad.

The band will play 26 concerts in total. Today they announced all of the dates with the exception of one.

The live line-up will consist of Robert Smith, Simon Gallup (on bass), Jason Cooper (on drums), Roger O’Donnell (on keyboards) and Reeves Gabrels (on guitar). As Smith says in the press release: “We’ll be performing 37 years of Cure songs, mixing hits, rarities, favourites, and as yet unreleased tracks in a brand new stage production.”

Let’s see if The Cure will also find some time to record the follow-up to the 2008 album “4:13 Dream”, it would be the band’s 14th studio album since “Three Imaginary Boys” was released in 1979. In the meantime enjoy this The Cure tribute compilation:

The dates confirmed so far:

Since you’re here … … we have a small favour to ask. More people are reading Side-Line Magazine than ever but advertising revenues across the media are falling fast. And unlike many news organisations, we haven’t put up a paywall – we want to keep our journalism as open as we can. So you can see why we need to ask for your help. Side-Line’s independent journalism takes a lot of time, money and hard work to produce. But we do it because we want to push the artists we like and who are equally fighting to survive. If everyone who reads our reporting, who likes it, helps fund it, our future would be much more secure. For as little as 5 US$, you can support Side-Line Magazine – and it only takes a minute. Thank you. The donations are safely powered by Paypal.
Tags: The Cure