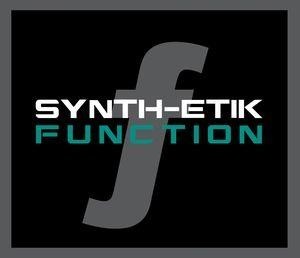 Content: It took 6 years for Frank Mokros (mainly known from Totakeke) to get back to his Synth-Etik project unleashing the 5th official album in history of the band.

“Function” once more confirms the great composing skills of this artist who likes to create unique sound treatments. The previous work of Synth-Etik often sounded as a hard industrial and sometimes power-noise assault while “Function” became a little less into modernism and sound minimalism. But the main evolution for sure is the wider range of influence you’ll notice on the new work.

It for sure remains strongly inspired by industrial sound structures, but you rapidly will hear trance-, minimal-electro- and even dub ingredients joining in. This way it became a rather open-minded work in the true vein of progressive-industrial music. Mokros seems to show us that industrial music is much more than power-noise, which a few years ago was quite common at the industrial scene. This is avant-garde industrial music, where different styles emerge.

The opening tracks fully reveal the modernism of the work. I enjoyed the somewhat trance apotheosis on “Monsters Among Us” and the great mix of industrial- and minimal electronics empowered by some shamanic rhythms on the title track. We next move towards harder passages to finally experience the industrial-technoid arrangements on, “Rapid Succession”.

I didn’t exactly expect a rather dub orientated evolution, but that’s what “Fallout” stands for. I’ve always liked the mix of industrial- and dub music however smaller industrial bands dare to experience this cocktail. I can assure you Synth-Etik does it in a magic way. But that’s not all as “My Design” moves a step further. This track sounds pretty groovy-like. I especially like the vibrating deep tones carrying this track.

“Function” finally ends with a hard-danceable industrial minded cut (cf. “Test Zero One”), which holds you in its grip for more than 13 minutes.

Conclusion: It feels good to get Synth-Etik back on track. “Function” is a well-crafted ambassador of industrial sound-modernism and eclecticism.

Since you’re here … … we have a small favour to ask. More people are reading Side-Line Magazine than ever but advertising revenues across the media are falling fast. And unlike many news organisations, we haven’t put up a paywall – we want to keep our journalism as open as we can. So you can see why we need to ask for your help. Side-Line’s independent journalism takes a lot of time, money and hard work to produce. But we do it because we want to push the artists we like and who are equally fighting to survive. If everyone who reads our reporting, who likes it, helps fund it, our future would be much more secure. For as little as 5 US$, you can support Side-Line Magazine – and it only takes a minute. Thank you. The donations are safely powered by Paypal.
Tags: Synth-Etik