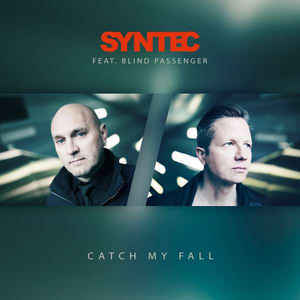 Background/Info: This is another surprising comeback! Syntec is a band I perfectly remember from their early work, which takes us back in the early 90s and the great label Machinery Records. EP’s like “It Takes A Word”, “Puppets” and “Angel” plus the albums “The Total Immersion” and “Upper World” definitely belong to the collective memory of the 90s synth-pop music.

The band was only active for a few years and now strikes back after a hiatus of 21 years unleashing this new song featuring Blind Passenger (Nik Page).

Content: Uwe Kallenbach (music & production) and Tobias Hartwig (vocals) didn’t really change their ‘old’ influences, which instantly bring us back to the essence of electro-pop music. “Catch My Fall” is a cool song composed with great sound treatments and a real enjoyable chorus. You don’t get the impression that 21 years are separating this song from their last work (1995). It sounds mature and well-produced while the vocals of Tobias Hartwig are still efficient and totally appropriated to this kind of music. The song has been sung in English although features a few German passages as well.

We next get 3 remixes taking off with a cool space-pop remix by Enter And Fall. My personal favorite remix is the one by Versus (signed on Trisol) while there also is a final remix by Scott Bells.

+ + + : The main and maybe only challenge was to know if Syntec ano 2016 still sounds credible!? The answer is YES, “Catch My Fall” is a well-crafted electro-pop song carried by danceable vibes, poppy sound arrangements and cool vocals. It clearly appears that Syntec hasn’t lost their original potential and creative mind to compose alluring pop music.

– – – : One single song and a few remixes by other bands is not enough to speak about a fully, successful comeback so let’s wait for more new songs to get a more objective point of view. “Catch My Fall” sounds cool and fully enjoyable although I don’t find the early magic from songs and hits back in the day like “It Takes A Word”, “Puppets” and “Angel”.

Conclusion: More than simply a comeback, this is a resurrection from one of the hottest synth-pop formations of the 90s, which illustrated the leading status of Machinery Records and the rise of German electronics. “Catch My Fall” is a cool song, but let’s waits for their full length “The Beginning” to see if they’ll get back to a place at the top.