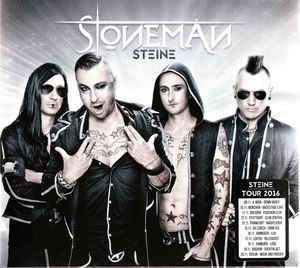 Background/Info: The Swiss Stoneman formation is back on track unleashing their fifth opus to date and the first one on NoCut. The earlier work was mainly released on Twilight while the previous opus (cf. “Goldmarie”) got released in 2014 on Danse Macabre.

Content: “Steine” rather starts off in a metal-oriented way revealing solid and alluring guitar riffs mixed with gothic atmospheres. The vocals were sung in German, which together with the epic arrangements and powerful guitar riffs sound like evoking the spirit of Rammstein.

The more you enter the universe of “Steine” the more you’ll notice melodic arrangements, which makes me speak about certain pop refinement empowered by metal music.

+ + + : The album is carried by an impressive sound production revealing a professional approach. The songs are fully entertaining merging power and melody lines. Some of the most powerful cuts are evoking the sound and approach of Rammstein and I here especially like the epic orchestration, but I also enjoy the more melodic pieces accomplished with cool melody lines. Songs such as “Eiskalt” and “Spiegelficker” both are noticeable cuts in the genre.

– – – : There are a few slow cuts on this album, which are less convincing. The title song is one of them and in my opinion definitely not the best exposure of this album. I also regret a few cuts remain pretty short, not going over 4 minutes.

Conclusion: Stoneman has the look and an interesting sound, which I can imagine will especially in their homeland, and of course in Germany, get audiences wild. “Steine” sounds cool and will possibly catch the attention of Rammstein fans although it doesn’t bring that much new.