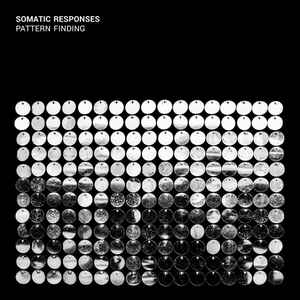 Background/Info: The brothers Paul- and John Healy better known as Somatic Responses are now active for more than 20 years. They’ve released an endless list of productions and started 2018 with “Pattern Finding”.

Content: I sometimes get the impression Somatic Responses wants to mix a maximum of influences together. It creates a diversified industrial opus, but it’s not exactly the most common Indus-format. This new work moves from dark-haunting spheres to dynamic breakcore parts to next deal with pure industrial crashes. Some cuts are pure ambient-minded while others reflect elements of acid- and techno music.

+ + + : Paul and John are no longer classical musicians. They became a kind of sound alchemists who’re exploring different styles, which are sometimes hard to match. Nothing is impossible for the duo and this album is a new testimony from their impressive skills. The work became a controlled chaos revealing different great parts. I’m into the haunting opening cut, but still in the techno-orientated “Captured”. Both songs sound like opposites, but the industrial arrangements make it compact. I also want to mention “Dirt Is In The Eye Of The Beholder”, which reveals the IDM approach of the duo. But here again you’ll notice the industrial basis running through the track.

– – – : Somatic Responses remains a guarantee for modern industrial- & experimental music, but on the other side and after that much records, the magic is a bit gone.

Conclusion: “Pattern Finding” covers an impressive list of influences, which have been all cemented by industrial sounds.

Best songs: “Dirt Is In The Eye Of The Beholder”, “Explosive Regression”, “Captured”, “Teenage Crush(ed)”.