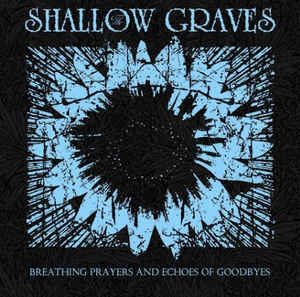 Content: Shallow Graves sounds like good-old gothic music. The main characteristic and strength of the composition is the typical wave-like, mewing guitar playing. No doubt about it, it will evoke some good-old souvenirs bringing us back in the dark 80s spirit.

A few cuts are empowered by some rock elements, but globally speaking it all remains very dark and new-wave like. Some softer and melancholic pieces can be noticed as well.

+ + + : If you’re into traditional and old-styled gothic music this album is definitely something for you! Shallow Graves doesn’t innovate, but simply recreates the dark and desperate new-wave spirit from the late 80s and 90s productions. Speaking for myself I prefer the somewhat harder tracks, which have been masterly carried by screaming guitar parts. “Shadows Begone” is a kicking song in the genre, but I also have to mention to beautiful and totally melancholic-minded “The Cage”.

– – – : I’m afraid the gothic community is not exactly waiting for Shallow Graves, which is rather emulating a good-old sound formula instead of adding anything new to this genre. Don’t get me wrong, it’s quite pleasant, but predictable after a while.

Conclusion: Shallow Graves sounds as dark as their name. The work is totally devoted to the darkest hours of new-wave music.