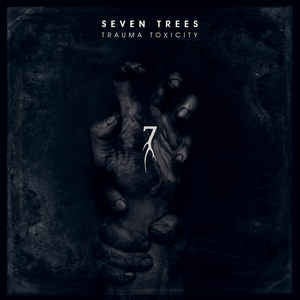 Background/Info: With the Swedish duo Seven Trees I feel a bit like going back in time. Set up in 1994 by Henrik Karlsson and Johan Kronberg the band was active during the 90s. The absolute consecration was the full length album “Embracing The Unknown” which was released on the legendary leading label Zoth Ommog and next licensed to Energy Records (Sweden) and Metropolis (USA). Seven Trees wouldn’t release any new work after this successful debut till this mini album featuring 5 new cuts.

Content: “Trauma Toxicity” brings Seven Trees back to life exactly 20 years after their debut and single full length. The songs clearly reflects the spirit of the 90s dark-electro and EBM sound. I got the impression of hearing the offspring between Mortal Constraint (for the industrial approach) and Paracont (for the sophisticated writing). The songs are into some minimalism, definitely dark-minded and supported with beautiful, dark strings. The somewhat harsh, whispering style of singing matches with the sound.

+ + + : Seven Trees holds on to their very own and retro-like sound approach. The songs are well-crafted, somewhat minimal-like and accomplished with intelligence. The haunting atmospheres hanging over this work are essential. The songs have been composed with cool sound treatments. I like most of the songs, but have a preference for the minimalistic “You Slit My Soul”.

– – – : “Trauma Toxicity” is a cool work, but without an absolute hit. The retro-style is maybe not what DJ’s are going to play first in clubs so this release is maybe missing a ‘club-remix’. The final songs “Cold Waves Of Silence” sounds pretty different in influences, like a dark, melancholic electro-pop experiment. It’s not bad at all, but not exactly fitting with the rest of the work.

Conclusion: “Trauma Toxicity” marks the return of Seven Trees and the single fact that they were signed on Zoth Ommog is a real good reason to be curious about their new work. I can reassure you they haven’t lost their original dark seduction and I can only, but hope that we’ll get soon new work by Seven Trees.