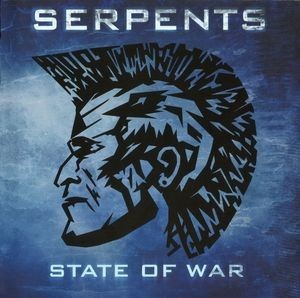 Content: Serpents is a rather familiar name for lovers of EBM and especially those who were into the 90s movement. It was a wonderful decade revealing an impressive list of great EBM-bands. Serpents was an established name and released a few noticeable productions.

Set up by Kazim Sarikaya and often getting the help of Claus Kruse (Plastic Noise Experience) the band made a come-back in 2010 releasing a new and remarkable album (cf. “Immer Voran!”). The work was badly promoted and didn’t get the deserved exposure as it was a real cool work. Five years later the band is already back with a new album featuring new material on the 1st disc and a re-release of “Immer Voran!” on the 2nd disc.

“State Of War” remains pretty faithful to the cold EBM style of Serpents. It reminds me of their earlier work although there’s a fresh and more contemporary touch on top. I can’t get away from the feeling that there also is a kind of refined touch running through the work, which sounds pretty PNE-like. Kazim and Claus clearly are the operating souls behind this band. They’ve written a dark-body minded opus revealing a strong 90s sound, but with a unique approach. This is a sophisticated EBM format constructed with captivating sound treatments (like deep bass lines, icy sequences) and a spooky-minded vocals’ production.

The songs are pretty minimal-minded, but still very accessible for lovers of body music. I especially like the transposition from the initial Serpents sound into a modern approach. Last year the band self-released the “Violence”-EP featuring 3 songs. These tracks are also featured on the album and the “Resistance”-song even is one of the best cuts for its cool dark-EBM touch with some noticeable Plastic Noise Experience-arrangements. Another song you have to keep in mind is the minimal-driven “You Hide”.

The album also features 7 remixes by bands like Plastic Noise Experience, Ad:Key, The Psychic Force, Pyrroline, Cyber and label mates kFactor and Astma. I was impressed by the remix of “Resistance” by Plastic Noise Experience and the Cyber-remix of “Violence”. Cyber was another cool band from Hamburg, which was a rather prolific EBM ground during the 90s.

The 2nd disc features a re-edition of the “Immer Voran!”-album revealing fresh versions of some of the original songs. The opus was written by Kazim Sarikaya and I’m still convinced it was his best album in history. It all sounds like a real metamorphosis. You can recognize some ‘old’ influences, but the new songs are fresh and modern! “Steh Auf” is an absolute gratifying track. The bass line sounds a bit goa-like while the dark, refreshing electronics are doing the rest. The vocals are rough like in the past.

The title-song is a bit quieter and space-like revealing the diversity of Serpents. EBM elements are coming back on “Folge Mir”, “Glaub An Mich” and “Zeig Dig”. These 3 songs are pretty well-crafted and efficient dance assaults as well. “Zeig Dich” is for sure one of the highlights of the album. The sound might remind you of bands like Die Krupps and Dance Or Die.

I remain totally seduced by the impressive and refreshing sound arsenal of Serpents. It all sounds like Kazim Sarikaya has reinvented his band with this album.

The final part features 5 remixes by Plastic Noise Experience. This is the main difference with the original version of the album which featured 4 remixes by other bands.

I like the remix by Plastic Noise Experience (no other band could be more fitting) of “Erwache”, which is the only remix that was featured at the original album. The other remixes bring us back to the debut album (cf. “Terminal Breath”) with noticeable remixes of “Kill What Kills You”, “Killer Agency”, “Protection” and “Second Life”.

Last, but not least the song “Wings Of Darkness” that was originally released on the album “What Is Fear” (1999) has been added to this track list.

Conclusion: Serpents strikes back with style unleashing a rather old-school new album and a new version of the somewhat unknown previous work, which is more into modernism.