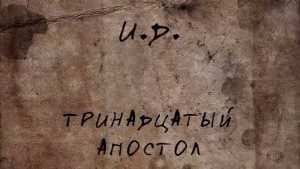 Content: Invisible Devastation is a Russian band dealing with influences of electro-pop and EBM. Set up a few years ago they didn’t release that much stuff, but got some positive response in their homeland. Behind this band is hiding Mechanical Apfelsine, which is a rather successful electro-pop formation. But it’s now time for Invisible Devastation and their official debut album “Тринадцатый Апостол” (cf. “The Thirteenth Apostle”).

One of the main characteristics of the band is the Russian language, which is used on the entire album. It creates a kind of ‘exotic’ and original touch, but it’s simply impossible for non-Russians to understand a single word and or to read the titles, which of course are in Russian as well. But on the other side it makes for the charm of this work and the particularity of Invisible Devastation.

The work sounds as a nice twist between EBM and pop influences. Some songs are more into an explicit electro-pop style, but it always has the influence of darker atmospheres and deep growling vocals.

The timbre of voice reminds me sometimes of Dario Seraval (Borghesia). The cavernous timbre of voice is in contrast to the music, but there definitely is a kind of complimentary.

The work features several cool songs, but I have a preference for the power-pop like “Наследие” and the catchy body-pop inspired “Дьявол”. You can hear that this duo is experienced with pure electro-pop music and that’s an aspect which comes through with some great leads. The songs are also accomplished by noticeable sound treatments and subtle bleeps and other fine arrangements.

“Красное Братство” is an interesting song for the somewhat cinematographic style

Conclusion: All of the songs can’t convince me, but globally speaking this album is a rather enjoyable release, which totally fits to the style of SkyQode.

Since you’re here … … we have a small favour to ask. More people are reading Side-Line Magazine than ever but advertising revenues across the media are falling fast. And unlike many news organisations, we haven’t put up a paywall – we want to keep our journalism as open as we can. So you can see why we need to ask for your help. Side-Line’s independent journalism takes a lot of time, money and hard work to produce. But we do it because we want to push the artists we like and who are equally fighting to survive. If everyone who reads our reporting, who likes it, helps fund it, our future would be much more secure. For as little as 5 US$, you can support Side-Line Magazine – and it only takes a minute. Thank you. The donations are safely powered by Paypal.
Tags: Invisible Devastation