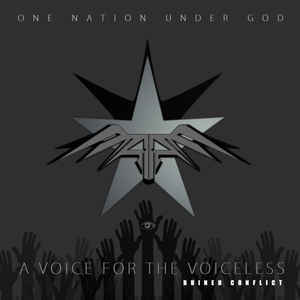 Background/Info: Xavier Morales is the hidden force behind Ruined Conflict. This American artist has released his 3rd album since “A.R.M.O.R.” (2013). Ruined Conflict has been often considered as a copy of VNV Nation and other future-pop groups so I was wondering what the new work would sound like.

Content: The future-pop inspiration remains intact, but we no longer can speak about pure future-pop music or a copy of a bigger band in the genre. The melodic and well-crafted ‘pop’ sound has been once more joined by guitar playing, but this time it becomes really hard and industrial-minded.

It sounds a bit like Combichrist and KMFDM have been mixed together with a strong future-pop taste. The guitar riffs are really tough and a bit mad. It creates a strong contrast with the electronic arrangements, which remain pretty pop-minded. Morales’ way of singing still sounds pretty Ronan Harris-like, but the vocals production became more enraged. This is future-pop with a real naughty flavor on top. “A Voice For The Voiceless” is the meeting between power and melody, between rage and sentiment.

+ + + : Not many bands have experimented with the mix of future-pop and furious guitar riffs. It all sounds like a pure sonic challenge, but in the end Ruined Conflict is a band daring to enlarge its musical horizon and the least I can say is that there are a few cool songs featured on this album. The harder body-like “Thumb War” is something special as the vocals have been replaced by great samplings in the genre of Noisuf-X.

– – – : The main force of the album also is its main minus point. Some of the songs are maybe moving a bit too far in the guitar adrenaline creating a severe duality with the electronic layers and the vocals.

Conclusion: “A Voice For The Voiceless” is a creative and I dare to say ambitious piece of work. It’s hard to classify and is clearly no longer belonging to the established future-pop standards. This is pure electro-rock or industrial-pop music.