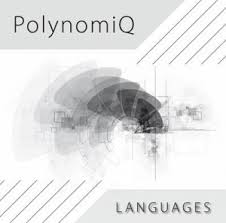 Content: Behind PolynomiQ hides Jean-Marc Mélot. This old servant from the Belgian- and international electro scene got some recognition for his work (together with Jean-Luc Demeyer) with Modern Cubism.

Mélot has always been fascinated by electronics and especially by the good-old analogue gear. PolynomiQ made a noticeable contribution at the tribute compilation to Etienne Daho released earlier this year by Boredom Product. We now discover the official debut album, which has been inspired by a concept, which is meant to ‘enlight a kind of testimony about those old computer languages used on the first computers generations; those languages were the first tools to help our civilization to match with the digital lifestyle as we know today’.

The music mainly reflects some real good memories from the 80s and I here mainly think of Kraftwerk. It’s not really an emulation of early Kraftwerk music rather than the use of similar sounds and space-like atmospheres. PolymoniQ voluntary excluded vocals to its work. I’m not really missing vocal parts although it would give an extra finishing touch to some tracks. But “Languages” first of all is an album on which you can enjoy the magic of pure vintage electronics. The rhythm makes it more accessible and even danceable. The tracks remind me of early EBM while it also sounds a bit space-pop minded.

Jean-Marc Mélot reveals once again his great composing skills. His work is absolutely well-crafted and I like the progression in the writing plus the accomplishment of great sound treatments. Some of the synth sounds are absolutely phenomenal. They have this typical old-style spooky touch. I here especially like the song “Algebra”. In a somewhat harder and more EBM-style I recommend “Cobol” and “Prolog”. “Prolog” is my personal favorite one for its dry snare and some fragmented sampled vocal parts add the little bonus I was talking about. A few other songs also feature sampled vocals parts, which have been produced by a vocoder.

Conclusion: PolynomiQ sounds like an ode to the pioneers of electronic music, but more than this, it confirms that old-school inspired electronics still have this magic touch. “Languages” is a brilliant production that will please all old-school electro lovers.