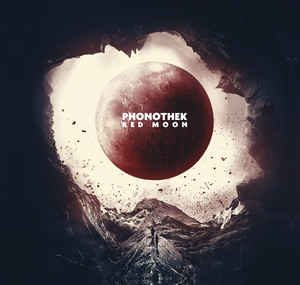 Background/Info: One year after the successful debut work “Lost In Fog” the Ukrainian Phonothek strikes back with a new opus (released as digital work only).

Content: One of the main characteristics of the debut work was the trumpet playing, which was referring to jazz influences. I didn’t exactly notice the link with jazz music, but I have to admit it’s an aspect that comes more through on “Red Moon”. The industrial jazz format has been mixed with traditional dark-ambient influences. All elements together create a paranoid sensation accentuated.

Notice by the way that both opening cuts feature guests. We first get a track together with Keosz and next one with Cities Last Broadcast.

+ + + : “Red Moon” is definitely not a copy of the debut work, but a continuation and move forward. Phonothek’s originality and main strength remains the original format, which moved further than ‘classical’ dark-ambient stuff. The trumpet has a hypnotic feeling, which through some monstrous blasts sounds like announcing a nearby disaster. The visual aspect of the work is another essential element and definitely a required to speak about a successful work in the dark-ambient genre.

– – – : “Red Moon” sounds more experimental and maybe a bit more fragmented than its predecessor. The sound became more complex and sophisticated, but still a little less accessible. I sometimes get the impression to hear a sonic puzzle or –collage while some simplicity would have been more efficient.

Conclusion: Phonothek remains a kind of innovating band dealing with dark-ambient music. Their debut work “Red Moon” will bring you obscure ambient music from another dimension.

Best songs: “Last Melody”, “Come In The Whisper”, “In The Smell Of The Wolves”.

Since you’re here … … we have a small favour to ask. More people are reading Side-Line Magazine than ever but advertising revenues across the media are falling fast. And unlike many news organisations, we haven’t put up a paywall – we want to keep our journalism as open as we can. So you can see why we need to ask for your help. Side-Line’s independent journalism takes a lot of time, money and hard work to produce. But we do it because we want to push the artists we like and who are equally fighting to survive. If everyone who reads our reporting, who likes it, helps fund it, our future would be much more secure. For as little as 5 US$, you can support Side-Line Magazine – and it only takes a minute. Thank you. The donations are safely powered by Paypal.
Tags: Keosz, Paranoid, Phonothek