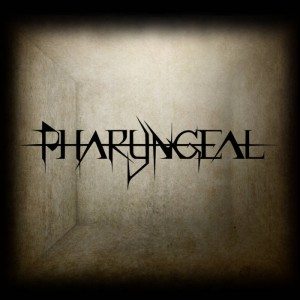 Background/Info: Pharyngeal is a brand-new Swedish project that was set up in late 2015. It doesn’t take that much time to achieve this self-released and self-titled debut-EP featuring 5 tracks. The EP is available as a limited CD format.

Content: “Pharyngeal” sounds like a sonic fusion between different sources of inspiration. The work takes off in a rather martial style and progressively evolves towards hard and merciless death-industrial passages. A kind of horror theme hangs over the production while heavy, screaming vocals feel like a possessed soul in action.

The guitar playing is quite important and only reinforces the eclecticism of the work. It sounds now industrial and then into pure hardcore while the EP finally ends a neo-folk inspired way. There clearly is a constant switch and symbiosis between the multiple influences running through this work.

+ + + : Pharyngeal sounds like in search of a new ‘industrial’ and ‘ambient’ dimension, which has been approached by an impressive arsenal of influences. I like this diversity, but have a preference for the more death-industrial style. I also like the sober, but artistic digipak format of this work.

– – – : I’m missing a bit more cohesion between the tracks. Pharyngeal sometimes appears to be a sonic laboratory revealing multiple influences, but missing a kind of sound identity.

Conclusion: I think this EP is an interesting debut, which might serve as basis to elaborate a more specific style and approach.