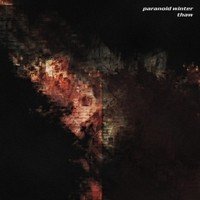 Background/Info: Paranoid Foundation often adapted their band name in function of their work. Set up by Crispin Lee, the British project now strikes back as Paranoid Winter, which is a name devoted to the Winter solstice for which this 5-track album has been written.

Content: “Thaw” sounds like a paranoid sonic universe, but first of all remains a poignant, ambient work. The songs are pretty minimal-like. There’s a scary and disturbing ambiance hanging over the production, which is empowered by spooky, half-spoken vocals.

The work sounds like a rite, which doesn’t give you the feeling to be devoted to Winter, but to evil forces. The tracks have been accomplished by numerous sonic treatments, and there’s also the surprising appearance of a clarinet. This is a chilling and desolate opus, revealing a few more elaborated passages during the final part.

+ + + : I like the progression of the song writing while the ghost-like male and female vocals add an extra frightening touch. This is ambient music with a strong visual appeal.

– – – : A few passages are missing an apotheosis and are stagnating in monotone constructions.