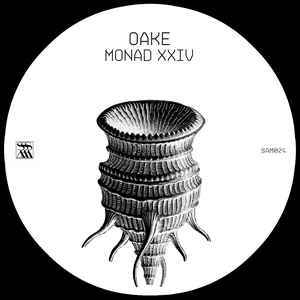 Background/Info: Eric Goldstein and Konstanze Bathseba Zippora started working together as OAKE in 2011. They’ve released a few numbers of productions and DJ-mixes. “Monad XXIV” is their first EP released on Stroboscopic Artefacts.

Content: This EP reveals 4 tracks carried by a solid techno-industrial sound joined by heavy and chilling atmospheres. OAKE sounds dark and into pure underground techno music. This is one more formation illustrating the small distance between techno- and industrial music.

There where industrial projects are experimenting with techno elements you still have techno artists moving on darker paths like industrial music. That’s precisely what this production is all about. There’s a great mix between both styles plus some impressive haunting ambient sphere on top of the work.

+ + + : “Monad XXIV” is the kind of production I fully enjoyed for its global sound intelligence and especially the approach of dark-technoid music. It not only is a great danceable production, but also an intelligent one revealing amazing sound blasts and even a touch of IDM. The opening piece “L’Esclandre” is a terrific cut, but I also have to mention the somewhat mysterious sounding “Paysage Dépayse” where in the background you can hear a kind of ghost-like female lamentation.

– – – : I didn’t hear any single negative aspect on this EP, but I simply regret I only got 4 tracks. This is the kind of band you want to hear more from.

Conclusion: OAKE stands for underground techno music, but also for a kind of progressive industrial sound. It definitely stands for a sound that has the power to catch music lovers from different genres.