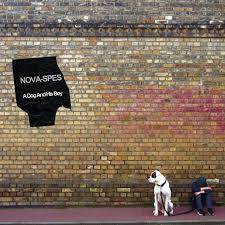 Background/Info: After a few self-released albums and 3 official ones, the electro-pop formation Nova-Spes strikes back with a new full length revealing 13 songs.

Content: “A Dog And His Boy” is a typical electro-pop inspired work driven by excellent melody lines, some cool and raw sound treatments and passionate vocals. The new album really has a strong potential, which probably explains why the album entered the famous DAC (Deutsche Alternative Charts). The songs have been boosted by some EBM elements and other more melancholic electro-wave influences.

The main point that hurts now and then that undermines the global production is the rather flat production of the drums. The drums sound pretty flat and without power. It creates a retro-feeling reminding me of some early 90s productions. So it could have been voluntary, but I think the songs would have been more ‘punchy’ with more ‘volume’ on the drums.

It doesn’t take away that the album reveals a few beautiful songs animated by charismatic vocals. The lyrical content is not exactly a way to make you happy. “A Dog And His Boy” deals with dark themes, but also reveals an engaged view upon society and our world.

+ + + : I like most of the melody lines and carrying sequences this album is made of. The vocals are alluring and still one of the main strengths of the band.

Conclusion: No doubt about it, this is the most convincing album of Nova-Spes. This is electro-pop music with potential, which could even become really great when improving some essential aspects of the production.

Best songs: “We Are The Light”, “Two Parts”, “Who will Protect Us From Lord”.