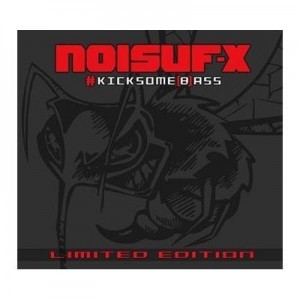 Background/Info:Jan L last year released the album “10 Years Of Riot”, which was a kind of celebration and a look back at 10 years of hard industrial-rave albums and multiple hits. “#,Kicksome[b] ass” is the 8th studio album of this sound alchemist.

Content: Noisuf-X doesn’t really change the successful sound formula consisting of hard-banging kicks, aggressive bass lines, rough electronic treatments, pure trance arrangements and multiple samplings. The main evolution with the previous albums is the empowering industrial touch of the work, which has been mixed with the powerful kicks. Jan L hasn’t reinvent Noisuf-X, but he once more takes us by surprise unleashing an explosive sonic cocktail.

The sound is heavy and constantly accomplished with dirty sound treatments. The title of the album clearly indicates what his sound is all about! This is stomping music for dancefloors and maybe the album revealing the biggest number of potential hits. There’s a constant power and a succession of outstanding songs. The samplings are once more very important and an essential element of the album. You clearly hear that the samplings have been threatened with care and that they’ve been added at the right place.

This album is a solid and impressive sonic bridge between techno- and industrial music while a lot of other elements can be noticed in between. I’m referring to the multiple filtered sequences and more psychedelic passages.

The album features 13 songs for a new riot while the 2nd disc is an EP featuring 7 extra tracks. I can’t say that there’s a difference between both discs. Noisuf-X simply moves on a merciless way and once again excels in sonic manipulations carried by solid beats.

+ + + :The creativity and composing skills of Noisuf-X seems to be endless. “#Kicksome[b] ass” is an album with a perfect balance between danceable, blasting beats, amazing bass lines, raw technoid sequences and brilliant threatened samplings.

– – – : I don’t see any minus point, but the constant beating power will maybe sound repetitive for some sensitive souls.