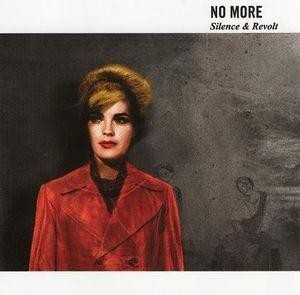 Content: No More, and especially their early hit “Suicide Commando”, belongs to the collective memory of the 80s new-wave music. The band stopped their activities at the end of the 80s, but struck back a few years ago. Since then they’ve released a few albums. The band actually consists of Andy Schwarz and Tina Sanudakura.

“Silence & Revolt” is the 3rd full length since No More’s resurrection. It’s not that easy to define their music today, but it’s definitely different compared with the early years. I think it would have been not a good idea trying to emulate their 80s work and their legendary hit. But on the other hand you always will compare the new stuff to “Suicide Commando” and that’s definitely the worst thing you can do.

This album takes off by the rather dynamic sounding “The Man Outside”. I noticed a few new-wave reminiscences like the typical deep sounding bass line, but globally speaking this track doesn’t really reflect the 80s spirit. No More seems to explore a path where good-old 80s elements and more contemporary electro-pop passages have merged together. The songs are well-crafted and mainly carried by a kind of spooky synthesizer lead, but without a real climax.

Some moody passages alternate with a kind of pop-rock style, but I had to wait for the instrumental song “It’s About Time” to get a real interesting cut to emerge from the tracklist. I like the dreamy-minded sequences running through the song. Next came up a few more interesting songs like “1816”, which sounds darker and more into explicit 80s influences. The somewhat obscure side of this song vaguely reminds me of The Virgin Prunes. I also have to mention the more cavernous way of singing on this cut. Andy Schwarz has a great timbre of voice, but this darker way of singing perfectly matches with the global atmosphere of the song.

“Silent Revolt” is another noticeable song and here again there’s a darker mood hanging over the composition. It now reminds me a bit of The Neon Judgement, but in a more wave-pop format. Among the few songs left I especially want to mention the beautiful and evasive “In A Leaden Time”, which is accomplished by some delicate piano-like arrangements.

Conclusion: The return of No More evokes some real good souvenirs to me, but unfortunately I’m missing the magic of the early years at this new opus.