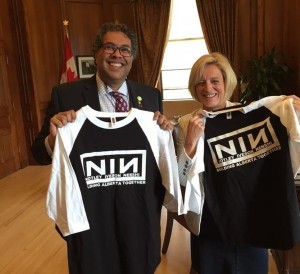 Trent Reznor has so far not reacted on the take-over of the NIN-logo by the Canadians who sell the t-shirts at $34,99 per piece. To be continued, but presumably Reznor won’t take offence since the political trio is left-wing minded.

It’s not the first time that Notley, a lawyer, has used a rock band for political reasons. During her campaign in spring 2015, her union supporters sold shirts holding Mötley Crüe’s logo while presenting themselves a the “Nötley Crüe”. She is currently the member of the Legislative Assembly of Alberta for Edmonton-Strathcona, and leader of the Alberta New Democratic Party.