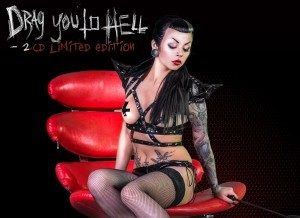 After 5 long years Alien Vampires finally returns with the follow-up to their 2010 album “Harshlizer”. “Drag You To Hell” is available in 2 physical formats (a 15-track CD and a 31-track 2CD boxset) via the Alfa Matrix webstore and as an extended bonus download version via Bandcamp including the non-censored artwork cover (which got the boot from iTunes, Amazon etc for being too sexy). The picture that goes with this article is also a censored one because Facebook and Google would block it otherwise…

New is also that Alfa Matrix is now applying a 15% discount code for all orders with more than 1 CD. When you enter the discount coupon code 643578 during checkout, you’ll get an immediate 15% discount on your entire basket. The code is valid until November 21st, so use it now before it’s expired.

On “Drag You To Hell” – which was mastered by Jan L (X-Music Production) – you’ll get collaborations with legendary artists like Attila Csihar (vocalist of black metal act Mayhem and Sun 0))) ), Sin Quirin (guitar player for Ministry), Nero Bellum (vocalist of US aggrotech band Psyclon Nine) and guitarist Charles Edward (Mayhem).

The album is available in a deluxe 2CD carton box limited edition with some special Aline Vampires fan-goodies and an exclusive 16-track bonus disc including alternative versions of album songs and a few remixes, plus 6 versions of the non-album track “All The Fakes Must Die”. The bonus disc is rounded up with the exclusive track “I Love Death More Than Life”.