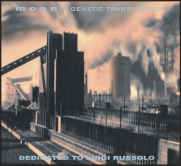 Background/Info: This album was originally released in 2004 and featured a new kind of collaboration between Polish artists Tomasz Twardawa (Genetic Transmission) and Rafał Sądej (Moan). Their previous work entitled ”Collaboration 1” has been re-released on Zoharum as well. Both artists wanted ‘to dedicate their music to Luigi Russolo, a composer who greatly influenced the creation of what we now call the urban music’. Each artist composed a long duration track.

Content: The style and influences are easily recognizable and clearly reminding me of the “Collaboration 1” experience. This is a soundscape made of industrial noises and endless sonic manipulations plus field recordings. It sometimes reminds me of the early 80s of experimental- and industrial music.

+ + + : What I especially like on this record is the global approach of both artists. They deal with the essence of retro-industrial music, which often resulted from a creative process seeing artists handcrafting their own equipment. It’s so much more original than the contemporary industrial artists turning on the knobs of their machines. This is industrial music composed with the truly, original spirit and that’s something I really like and often miss today. That’s also why this album hasn’t been affected by the weight of time. I’ve a preference for the track composed by Genetic Transmission.

– – – : Both cuts might become a little bit long-winded after a while and that’s especially because it remains ‘extreme’ music appealing for a very restricted number of fans.

Conclusion: Even if this album might be considered as ‘contemporary’ industrial-like, it still has something vintage getting me back to the early 80s; great souvenirs and original industrial music.

Since you’re here … … we have a small favour to ask. More people are reading Side-Line Magazine than ever but advertising revenues across the media are falling fast. And unlike many news organisations, we haven’t put up a paywall – we want to keep our journalism as open as we can. So you can see why we need to ask for your help. Side-Line’s independent journalism takes a lot of time, money and hard work to produce. But we do it because we want to push the artists we like and who are equally fighting to survive. If everyone who reads our reporting, who likes it, helps fund it, our future would be much more secure. For as little as 5 US$, you can support Side-Line Magazine – and it only takes a minute. Thank you. The donations are safely powered by Paypal.
Tags: Moan / Genetic Transmission