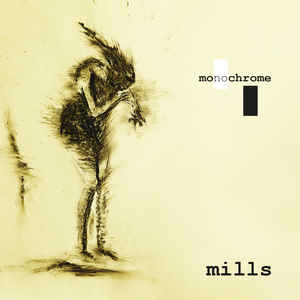 Background/Info: The Austrian Mills has been set up in 1994 by Walter Glatz and Alexander Steiner. The band went through several line-up changes, but both core members remained the only members on board. After a few self-released productions “Monochrome” can be seen as the official debut album.

Content: “Monochrome” stands for sound reverie, reminding the most melancholic hours from the 80s. There clearly is a strong cold-wave inspiration, which has been transposed into a proper sound approach. Guitar and electronic treatments are coming together creating a delicious sound osmosis sometimes revealing elevating choruses.

I also have to say a word about the captivating vocals (sung in English) revealing the great vocal skills of Walter Glatz. Music and vocals together might appeal for lovers of Diary Of Dreams although the music is not similar, but it’s more about the mood running through the work.

+ + + : The guitar playing is an essential element to understand this work. It reminds me of the 80s, but I especially love the emotional content of the play. The music stands for darkness and artistic beauty. The melancholia becomes a sweet feeling of reverie taking the listener away to explore his deepest inner thoughts. The transcendental “Lost” is just one of the highlights and a sweet caress for the ears of music lovers. The arrangements are delicate and still revealing a refined taste.

– – – : The opening song, which can be often considered as an intro, is somewhat hesitant, but once you’ve passed this debut cut you’ll discover an album made of beauty and magic. It’s maybe a pity there are only 8 songs featured, but my real single regret is that there’s no booklet accompanying this album.

Conclusion: “Monochrome” is an invitation to dream away rocked by the beauty of the sound. Mills is pure ecstasy!