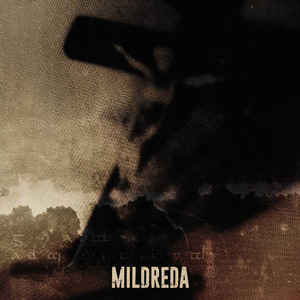 Background/Info: We all know Jan Dewulf from his electro-pop band Diskonnekted, but the Belgian pop-master was previously active under the Mildreda moniker. That was a while back, somewhere in the midst of the 90s when Mildreda released two cassettes. After a long hiatus Mildreda was reactivated and even played live. Jan Dewulf even composed a bunch of new songs in 2009. “Coward Philosophy” features the ‘new’ and previously unreleased cuts plus a bonus of early demo songs and live cuts.

Content: The ‘2009’ songs reveal a fascinating electro-industrial style, which is mixing heavy epic blasts reminding me of In Slaughter Natives together with dark and doom-minded electro atmospheres, which are now and then reminding me of Yelworc. The cuts are carried by bombast and intriguing growling vocals by Jan Dewulf. The work is not entirely industrial-like, Jan Dewulf sometimes gets back to more electronic work. It however remains cold and always carried by some industrial treatments. I really like the contrast between Diskonnekted and Mildreda revealing the open-minded approach of this composer.

We next get 14 demo songs from 1996. The work is quite different and more dark-electro driven. You now will recognize some possible influences from bands like Suicide Commando and In Strict Confidence, but here again with some epic arrangements and industrial sounds on top. It feels a bit like a demo for what Mildreda accomplished in 2009.

Last, but not least there are 6 live versions from a live show in Bruges during 1998.

+ + + : I was impressed by the elaborated electro-industrial compositions of 2009 revealing impressive epic arrangements and great moody atmospheres. Jan Dewulf is revealed to be a multi-faced musician who can switch from alluring electro-pop to industrial mysticism. The ‘recent’ work of Mildreda features many cool songs.

– – – : Some In Slaughter Natives tricks sometimes are a bit too emulative and predictable. The older cuts are not as interesting and I especially refer to the live tracks.

Conclusion: If you never got the opportunity to hear the industrial side of Jan Dewulf you definitely have to give Mildreda a chance. I sincerely hope this new project will inspire and motivate Jan to move on with Mildreda.