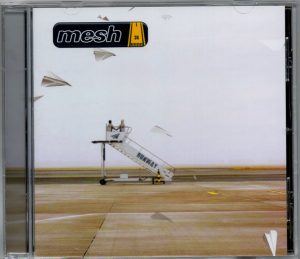 Background/Info: “Runway” is the second single/EP taken from the last year released album “Looking Skyward”. It sometimes is easier to choose a title song for an EP when an album has been already released. It gives the opportunity to the band to see which songs the fans prefer and that’s probably what incited the guys from Bristol to take “Runway”. It definitely was my favorite song from their 8th full length.

Content: “Runway” is a solid electro-pop song in the truest Mesh-format. The track is carried by a solid electro blast while the chorus has this elevating power we’ve been used to hear from Mesh. Next to the “Radio Edit” there also is an extended version entitled “Club Class Mix”.

The EP also features 2 new songs. I especially want to say a word about “Tuesday”, which is much more than a B-side cut. This is another cool song with a carrying melody line and a tiny bit Depeche Mode-like.

+ + +: “Runway” is the perfect song for an EP. It sounds in the powerful-pop approach of Mesh revealing that unique sound DNA. It sounds danceable and driven by a superb melody line joined by the great vocals of Mark Hockings. The “Club Class Mix” has this little bonus to set dancefloors on fire. No doubt about it, this is one more Mesh-song that will for sure become a classic! Among the 2 songs left I already mentioned the cool “Tuesday”, which has a little retro-feel.

– – – : The only regret probably is the absence of any remix by another band. I’m not that fond of remixes, but “Runway” for sure is a very inspiring song to get exposed to the remix skills of talented artists. “Too Little Too Late“ is not exactly a Mesh song that will enter history.

Conclusion: “Runway” remains my favorite song from the latest Mesh-album while you get 2 previously released songs on top.