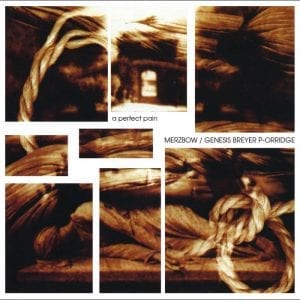 Background/Info: Originally released in 1999, “A Perfect Pain” has been now remastered and re-released. The work features two major artists from the industrial/noise fields. At one side there’s Genesis Breyer P-Orridge who’s one of the pioneers of industrial/experimental music. As member of Throbbing Gristle and Psychic TV he became a world-wide recognized artist for his ‘art’. At the other side there’s Masami Akita, the Japanese ‘king’ of noise.

Content: The procedure both artists have used to make this work come through is quite simple. Genesis Breyer P-Orridge wrote the texts while Masami Akita added his familiar noise work. The fusion between both artist is really interesting as it creates a good-old, early experimental/industrial format. This is the kind of production that could have been released during the 80s. The texts of Orridge are worthy of examination; there’s something very critical, but also philosophical.

+ + + : When two ‘giant’ artists work together you only, but can obtain something special. And that’s what this album stands for. The lyrics were performed in a narrating style, but it also sounds a bit ghost-like while the ‘music’ reveals a subtle noise approach. I know it sounds a bit weird to speak about noise and subtlety, but there really is something ‘refined’ in the work of Merzbow. This is the kind of work I like for reminding me to early 80s productions.

– – – : While this work will be adored by lovers of extreme sounds it will be hardly accessible for the others.

Conclusion: Cold Spring once again recovered a great album from dust. It’s an opportunity to (re)discover this interesting and successful collaboration.

Since you’re here … … we have a small favour to ask. More people are reading Side-Line Magazine than ever but advertising revenues across the media are falling fast. And unlike many news organisations, we haven’t put up a paywall – we want to keep our journalism as open as we can. So you can see why we need to ask for your help. Side-Line’s independent journalism takes a lot of time, money and hard work to produce. But we do it because we want to push the artists we like and who are equally fighting to survive. If everyone who reads our reporting, who likes it, helps fund it, our future would be much more secure. For as little as 5 US$, you can support Side-Line Magazine – and it only takes a minute. Thank you. The donations are safely powered by Paypal.
Tags: Merzbow, Merzbow / Genesis Breyer P-Orridge