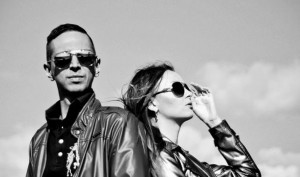 Out since May, 21st for free download is the brand new Mangust release, the full length 13-track album “Deconstruction of the falling stars”. It’s the band’s third album so far for the duo (Alexey Boytsov and Olga Bestuzheva) and offers a quite refreshing approach both vocal and electronic wise.

Mangust started first as a solo project by Olga Bestuzheva in fall of 2012 while living in Mexico (nowadays she is based in St.Petersburg, Russia). After releasing the album “No room for error” in April, 2013 via the web-label Synth-me she was joined by Alexey Boytsov (frontman of the old-school industrial band The-Pulsar) to join as a vocalist. In May, 2014 Mangust released the EP “Fragile”, including 5 remixes of the title song and two instrumental bonus tracks.

Here’s a teaser of the album