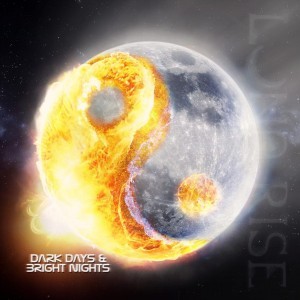 Background/Info: In the Tradition of Dark Rock and Melodic Rock, comes a group from Austria. „Luna Rise“, who are ambitious musicians. It was not so long ago, they had an impact with their gloomy, mystic and melodic very first release „Smoking Kills, But Love Can Break A heart“ in Western Europe, back in 2011.

Content: Now they are back and presenting their so called Heart Rock, with their first full-lenght Dark Days And Bright Nights. Some might think, Heart Rock? It comes very close to HIM with their Love Metal, yes it does, but It might also be the perfect way to describe the music. That is quite emotional dark- and melodic rock songs, here and there with a hint towards industrial acts like Pain and Oomph. Yet, the whole constantly remains on a listener-friendly level and there’s plenty Songs on the Album which are simply all Killers and yes. Luna Rise are a perfect trip for fans of music, such of that from HIM, Velvet Six, Or The Rasmus.
To face the facts, Dark Days And Bright Nights is an concept album on which the first side, the Dark Days got electro synths in it, with an unbelievebale, intense, power rock. Already the opener „Demons inside“ is a strong track with great guitarwork, amazing synths, fabulous lead vocals and stunning guitars. No One Else than Bernie Pfeiffer (Exit To Eden) is featured on this Song. The Rzrkt is even more powerful and a hymn, and for the song Valentine, we also got a video to show, featuring austrian’s topmodel Sonja Plochl as female guest star:

The only thing to complain, is the coverversion of Ultravox classic „Dancing with tears in my eyes“ don’t take this the wrong way, Luna Rise did an outstanding coverversion of it and they really honor the original, BUT: Why a cover Song? The Band got plenty great and fab’ Songs on this Album, seriously, they don’t need to cover and 2. Why espacially THIS Song?

Let alone the Fact, that Luna Rise are talented musicians and face the fact, that they sounds like a Mix of HIM Billy Idol, The Rasmus, Velvet Six and (believe it or not) in some way Van Halen. They show that they are an Original and not a Copy in every single way. For A Reason comes like the other Songs with great music and an pretty Lyrics (as it is on the whole album).

With Silent Screams, Luna Rise opens the second part on this album. „Bright Nights“ and what they do here, is quite fantastic. While Silent Screams is a nice rocker, Worshippin’ Shadows, will blow you away with it’s dark rock feeling and vocals, melodies full of passion. Until The Stars have come is an pretty Duett with former Dreieck member Melanie Hirner, her voice in partnership with Luna Rise’ leadsinger Chris Divine, makes this Song so haunting good. The Storm sounds with it’s bombastic Keys, somekind of epic. Another Anthem which Luna Rise created here. To drop a clue the Last track on The Album „The Anthem Of The Night“ is an last, fantastic Track that is strong and really an anthem itself. The music, those melodic lines and Vocals, this is really an outstanding experience.

9 of 10 is an fair rating… Luna Rise plays great dark- and melodic rock music and yes, heart-rock is really the right word for it. All musicians are talents at their job and this LP prove it. The electronic synths are great, the guitarist is an hero, drums are straight, bass just awesome and the vocals, riffs and melodies are just amazing.

This Album is for Fans of Melodic Rock, Dark Rock and Heavy Metal with an grain of electronic driven synths. This Album is not only for fans of melodic- and dark rock such as HIM, The Rasmus, Or Velvet Six, but for everyone, who likes good and ambitious rock music.

Since you’re here … … we have a small favour to ask. More people are reading Side-Line Magazine than ever but advertising revenues across the media are falling fast. And unlike many news organisations, we haven’t put up a paywall – we want to keep our journalism as open as we can. So you can see why we need to ask for your help. Side-Line’s independent journalism takes a lot of time, money and hard work to produce. But we do it because we want to push the artists we like and who are equally fighting to survive. If everyone who reads our reporting, who likes it, helps fund it, our future would be much more secure. For as little as 5 US$, you can support Side-Line Magazine – and it only takes a minute. Thank you. The donations are safely powered by Paypal.
Tags: Luna Rise, NRT