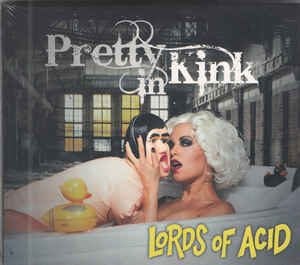 Background/Info: Exactly 30 years after their creation and the legendary hit “I Sit On Acid” Belgian techno-phenomenon Lords Of Acid is back. “Pretty In Kink” is the band’s first new album since the rather disappointing “Deep Chills” (2012). Maurice Engelen aka ‘Praga Khan’ and core member Erhan Kurkun have been joined by new singer Marieke Bresseleers.

Content: The album features 12 songs, which quickly sounds like a move back to the roots. Is it because of the rather disappointing previous album or just an intentional move to go back to early Lords Of Acid music, but “Pretty In Kink” sounds old-styled. Industrial-techno with some punk on top is the essence of this work. The good-old breakbeats have been recovered from dust while the lyrical content and global image of the band remains pretty sexy and provocative.

“Pretty In Kink” sounds pretty diversified. There’s a song featuring Spanish male vocals while there’s also a rapper featured on another cut and a very personal interpretation of the “James Bond” song “Goldfinger”. Lords Of Acid are back with the best exponents from the past.

+ + + : This is an album you’re going to like or not. Some will say it’s just an easy and cheap emulation from their early and successful sound formula, but I think it’s just a good album featuring several cool songs. It clearly has a retro-touch, which mainly comes through in the techno arrangements, but here still is this power and ‘punk’ attitude. I also have to say a word about the new vocalist who’s a real talented artist. Her timbre of voice sometimes reminds me to Jade 4U. This album gets us back to early industrial-techno music, but also to early Prodigy and Praga Khan.

– – – : Innovation is far to find and we might expect a bit more creativity from a band that doesn’t release new stuff on regular basis. And the good-old Lords Of Acid remains much better and visionary than this “Pretty In Kink”.

Conclusion: In times of recycling, even Lords Of Acid are re-using good-old ingredients, which have made them famous. It’s not original although I like this work. I must be nostalgic!