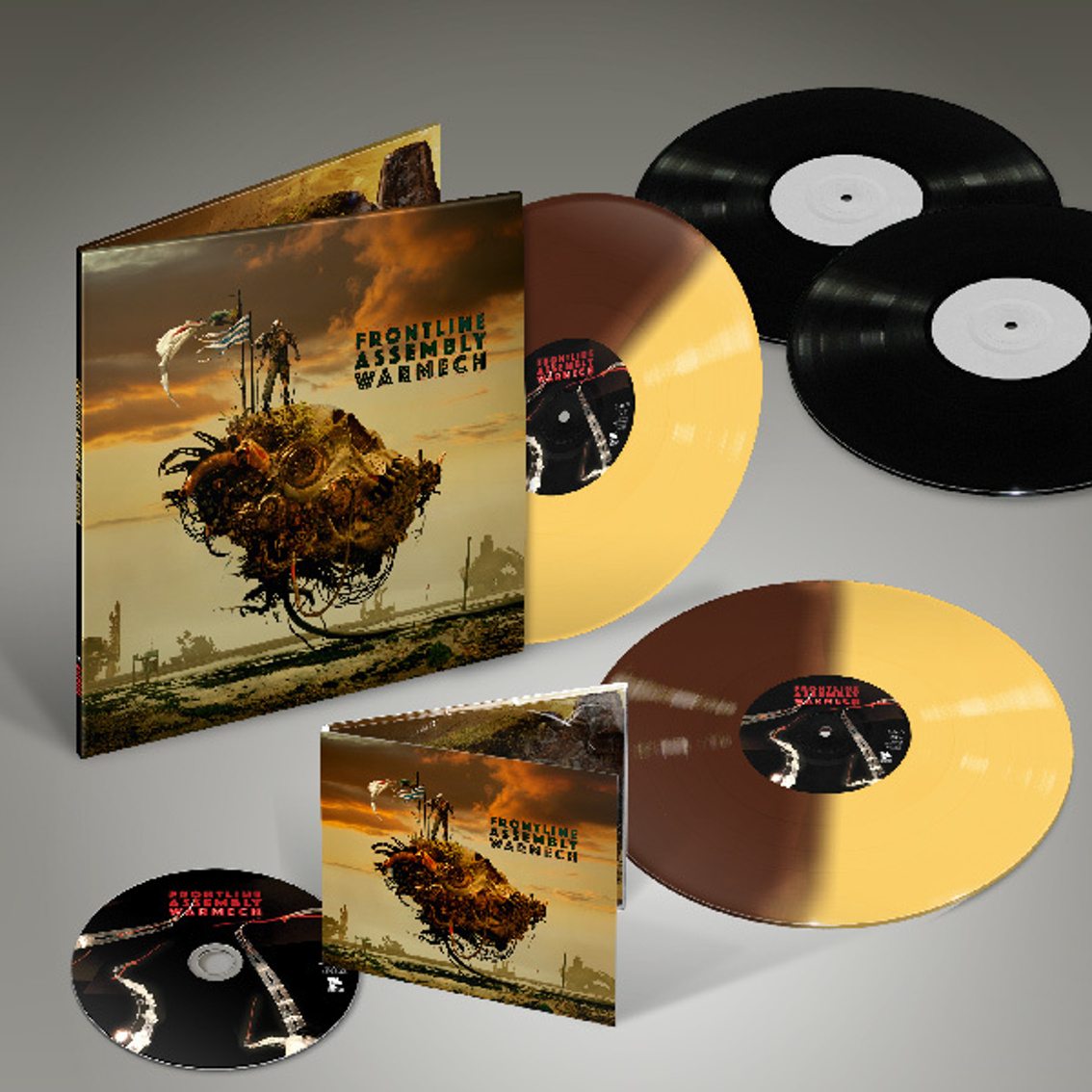 Out later this Summer on Artoffact Records (and already available for ordering via the label’s mail-order in various vinyl versions) is Front Line Assembly’s all-new soundtrack for Carbon Games’ latest creation, “WarMech”.

For this release Bill Leeb is joined by Jared Slingerland, Sasha Keevil, Craig Johnsen, and the late-great Jeremy Inkel. In total you get 12 tracks ranging from industrial to ambient to techno.

The album will be released on double vinyl (next to a CD digipak version) including black and greasy-mess versions, as well as a strictly limited (100 copies) dystopian future half-half effect version (available here) with both brown and yellow. The vinyl comes in a gatefold sleeve designed exclusively by Dave McKean, and you also get a collectable, branded download card. You can discover the various versions right here.

Note that a special exclusive fan pack is also available limited to only 11 (eleven!) copies worldwide – orders for this pack can be placed here. It includes the dystopian future half-half effect vinyl, CD digipak, and test pressings.

What is AirMech Strike?

For those unaware about the game itself. AirMech Strike is a free Player vs Player action-strategy game available on PC and Steam where you battle other AirMech pilots to dominate contested territory. Using your AirMech, a transforming mech which can fight on the ground or fly in the sky and carry your armies over the battle.

Build tanks, troops, artillery and more to hold your ground or push the fight forward. Each AirMech class has unique abilities, and teaming up with other AirMechs to enter battle lets you decide the type of commander you want to be. Intense combat action and complex strategic play is the path to victory!

Since you’re here … … we have a small favour to ask. More people are reading Side-Line Magazine than ever but advertising revenues across the media are falling fast. And unlike many news organisations, we haven’t put up a paywall – we want to keep our journalism as open as we can. So you can see why we need to ask for your help. Side-Line’s independent journalism takes a lot of time, money and hard work to produce. But we do it because we want to push the artists we like and who are equally fighting to survive. If everyone who reads our reporting, who likes it, helps fund it, our future would be much more secure. For as little as 5 US$, you can support Side-Line Magazine – and it only takes a minute. Thank you. The donations are safely powered by Paypal.
Tags: Artoffact, Front Line Assembly, WarMech