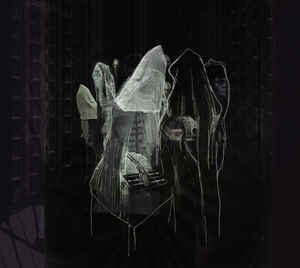 Background/Info: Hailing from Birmingham (UK), Khost has gained a serious reputation in a rather short lapse of time. Andy Swan and Damian Bennett released some real noticeable productions while they did some massive live performances. The apotheosis probably was when Justin Broadrick (Godflesh) reworked the work of Khost on the “Needles Into The Ground”-album (2016). Khost is now back on track with a somewhat intimate work, which was inspired by some personal drama like sickness and one near-death-experience.

They’ve asked a few guest musicians who by the way are already familiar with Khost. Eugene Robinson (Oxbow), Syna, Daniel Buess and Jo Quail already contributed to the “Corrosive Shroud”-album (2015).

Content: Khost is not exactly music for sensitive souls. The mix of heavy screams, dark and oppressive atmospheres, heavy industrial elements and drones and metal music all together create a rough sonic creation. You now and then will notice some unexpected elements such as a kind of esoteric chants and sweet female vocals.

The last track is a remix of “Coven” by Adrian Stainburner (Israel).

+ + + : It didn’t take that much time to Khost to become experts in their genre. The music style is pure crossover featuring different influences, which might appeal to lovers of doom-metal music, but still to death-industrial. The sound is constantly recovered with heavy sound layers and oppressive atmospheres leading the listener into a vision of horror. I sometimes get the impression that Khost is starting there where their town mate Justin Broadrick is stopping. But on the other side I also like the few, more sensitive elements –such as the contribution of Jo Quail, running through the work.

– – – : Khost is one of those formations composing music for extreme souls! It means that it’s not exactly the kind of accessible release. Speaking for myself, it took some time to get into the sonic aggression created by this combo.