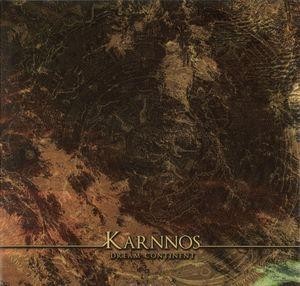 Background/Info: There’s been a hiatus of 10 years between the previous album of Karnnos and the new work. Karnnos is a Portuguese formation, which has released 4 albums before the long break that happened after “Undercurrents And Lost Horizons” (2005). They strike back on Cynfeirdd again, but with a different line-up.

Content: “Dream Continent” sounds like a new start for Karnnos although they remain faithful to some of their familiar elements. The new stuff sounds more into diversity and impregnated by different influences. Some of the mystic influences feel like a wink to Dead Can Dance, but globally speaking this composition is moving in between cinematographic impressions and ballads filled with reverie.

There’s a perfect balance between electronics and acoustic (traditional) instruments. It injects an intriguing atmosphere into the work, which sometimes comes closer to a ritual style. Whispering vocal fragments reinforce the mysterious impact of the album. “Dream Continent” sounds now into reverie and then into chilling passages, but always supported with a poignant ambient touch.

+ + + : It’s pretty hard to define this work as one particular genre. Karnnos created an own approach in style, which appears to be one of the most significant moves compared to the past. The work is accomplished and eclectic.

– – – : Despite of many cool songs, I don’t really get the impression to have found a real climax.

Conclusion: “Dream Continent’ sounds a bit like the start of a second life for Karnnos. This album appears to be a kind of resurrection transposed into an open-minded ethereal-folk format.

Best songs: “A Space Out Of Space”, “An Ocean Of Bliss”, “Timeless Echoes”.