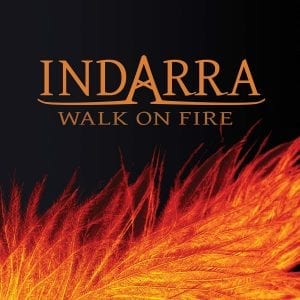 Background/Info: Some of you might remember Rhea’s Obsession, a Canadian band that was mainly active in the second part of the 90s. They released two albums. Indarra is not really a resurrection of this band, but it features singer Sue Hotton who has been joined by numerous guest artists.

Content: “Walk On Fire” is a truly music trip mixing multiple influences. Most of the songs are pretty dreamy-like, mainly driven by a slow rhythm and Sue Hotton’s sensual timbre of voice. The compositions have been composed with electro gear, and also with authentic instruments. The dreamy atmospheres are sometimes a little bit mysterious, which might remind you of Delerium. I can also mention Massive Attack for the darker and trip-pop driven passages.

+ + + : This album is al cool surprise. The music has something pretty authentic and artistic. The songs are styled and refined. It often sounds as a delicious sonic caress, which is accentuated by the impressive vocals of Sue Hotton and the mysterious atmospheres. The album is progressively growing reaching multiple states of climax.

– – – : There’s some versatility running through this work, which I can imagine might not please all listeners.

Conclusion: This is an album I highly recommend to music lovers in search of a truly artistic creation. Indarra brings different influences together on a graceful and fully enjoyable work.

Best songs: “Colour Of The Rising Sun”, “Melody Of The North Winds”, “To Make Change”, “An Innis Aigh”, “Falling Into You”.

Since you’re here … … we have a small favour to ask. More people are reading Side-Line Magazine than ever but advertising revenues across the media are falling fast. And unlike many news organisations, we haven’t put up a paywall – we want to keep our journalism as open as we can. So you can see why we need to ask for your help. Side-Line’s independent journalism takes a lot of time, money and hard work to produce. But we do it because we want to push the artists we like and who are equally fighting to survive. If everyone who reads our reporting, who likes it, helps fund it, our future would be much more secure. For as little as 5 US$, you can support Side-Line Magazine – and it only takes a minute. Thank you. The donations are safely powered by Paypal.
Tags: Delerium, Indarra, Metropolis