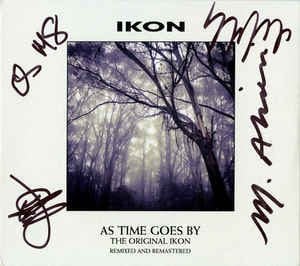 Background/Info: Set up in 1991 Ikon has been often considered as one of the Australian gothic pioneers. They can look back at an impressive discography. This work brings us back to the early hours of the band, back in 1992 when they were composing and recording their debut 7”. Due to different circumstances the single became quite different from the initial purpose. Eight songs have been composed, which have been released on the first disc while the second disc is a live recording from 1992 in Melbourne.

Last, but not least I also have to say that this album is featuring the original singer of the band Michael Aliani who later on set up Chiron.

Content: The first disc is an opportunity to (re)discover the first recorded and released Ikon songs “Why” and “As Time Goes By”, but also Reality Is Lost” (which got released on their next single). The music is inspired by the darkest hours of the 80s new/cold-wave movement and might appeal for lovers of Joy Division. The songs are pretty dark, sometimes achieved with synth parts and always masterly carried by Chris McCarter’s great guitar playing.

The second disc is a selection of live songs and other (hidden) cuts. This concert happened in the same period as the single so you’ll get back the same songs, but now live. And there are six hidden cuts featuring cover versions of The velvet Underground and The Stooges.

+ + + : This album is truly a testimony from the past and a kind of Ikon legacy today. It’s really fun and pure pleasure to rediscover the forgotten songs from the first hours in Ikon’s history. Great guitar parts and charismatic vocals are bringing the 80s spirit and especially Joy Division back to life. This is pure nostalgia, but still the work of a band that would become a reference in gothic music and one of the major Australian underground formations in history. The songs have been remixed and remastered.

– – – : This album has been previously released in 2007 (Equinoxe Records) as a single disc featuring the studio songs plus 4 live cuts. We now get the complete live show from 1992 in Melbourne plus extra hidden songs. It’s a pity there’s no tracklist available of the hidden cuts and no info about it.

Conclusion: This album is a must have for the die-hard fans, but if you simply like Ikon and/or gothic music it’s also worthy of examination. Ikon maybe never got the deserved recognition in Europe, but it remains a great formation.