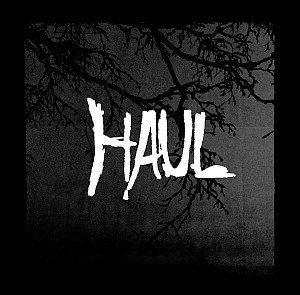 Background/Info: Progress Productions is one of those labels that dares to sign real challenging bands. That’s one of the main strengths of the Swedish label, which this way has already given us the opportunity to discover real interesting formations. Behind Haul hides Pehr Heurberg who got previously involved in the EBM-driven Militant Cheerleaders On The Move and Kretipleti (which was more into techno music). I noticed that the band already released a 7” vinyl in 2012, but this full length appears to be the real launch for a band that has been introduced as an actual  ‘black’ group.

Content: The opening cuts quickly reveal their essence and influences, which bring us back to the 80s and the new-wave movement. Joy Division can be considered as a potential source of inspiration, but other cuts are more into shoegaze. The shadow of The Jesus And Mary Chain is progressively passes through the work. I can also mention The Stooges as one more source of inspiration so in the end it all becomes crystal clear that Haul is totally devoted to pure ‘dark’ music.

The guitar clearly has a main impact on the genre of the album, but it has been mixed with cool electronic parts. One of the main particularities of the work is the vocals. Several cuts remain instrumental versions while Heurberg sings on the other cuts like an enraged and possessed creature. It sounds a bit punkish, but it works.

Notice by the way that several guest musicians contributed to this work.

+ + + : Haul is a particular formation for being quite different from the contemporary electronic- and gothic formations although this album doesn’t bring anything really new. Influences of the past have been remarkably adapted into a new a poignant work. This new band also reveals the eclecticism of Pehr Heurberg who already has experience with different genres, but I get the impression Haul will rapidly become his most successful band.

Conclusion: Everything has already been experienced when it comes to ‘dark’ music and so I’m not sure if Haul is darker and more ‘black’ than the rest, but “Seperation” serves as a pretty cool piece in the genre.