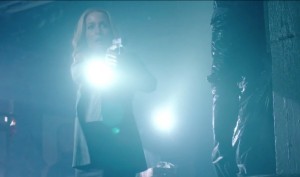 As we reported earlier, “The X-files” returns for a six-episode series helmed by creator/executive producer Chris Carter and starring David Duchovny and Gillian Anderson as FBI Agents Fox Mulder and Dana Scully.

Also returning are the Lone Gunmen, Annabeth Gish, Mitch Pileggi and William B. Davis while Joel McHale will play a conservative pundit who tasks Mulder and Scully with investigating a woman (Annet Mahendru) claiming to have been abducted. Kumail Nanjiani will also play a small role, while Robbie Amell and Lauren Ambrose will play a pair of new FBI agents.

And for the OST fans, music composer Mark Snow has also come aboard. You can watch the (shorter) trailer below.

The series will premiere January 24. 2016. The uncut trailer can be viewed below (lesser quality though).

“The X-Files” is an American science fiction horror drama television series created by Chris Carter. The program originally aired from September 10, 1993, to May 19, 2002, on Fox, spanning nine seasons and 202 episodes. The series revolves around FBI special agents Fox Mulder (David Duchovny) and Dana Scully (Gillian Anderson) investigating X-Files: marginalized, unsolved cases involving paranormal phenomena. Mulder believes in the existence of aliens and the paranormal while Scully, a skeptic, is assigned to make scientific analyses of Mulder’s discoveries to debunk his work and thus return him to mainstream cases. Early in the series, both agents become pawns in a larger conflict and come to trust only each other. They develop a close relationship, which begins as a platonic friendship, but becomes a romance by the end of the series. In addition to the series-spanning story arc, “Monster-of-the-Week” episodes form roughly two-thirds of all episodes.