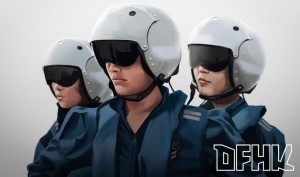 Decay Force Hong Kong aka DFHK is a brand new Hong Kong based synth pop act formed in 2014. The trio (Jet Dongguo, Nicolas Wong & Zhang Yi) make dark synth pop music and have now readied a first EP, “The Demos”, to be released this fall. 7 out of 9 the songs were mixed by the band and mastered by Chris McCormack of Blacklisted Mastering, UK. It will be released this fall.

The band’s debut release will be accompanied by several video clips, the first one is for the self-titled song “Decay Force Hong Kong” which you can view below. Mind you, if you suffer from Epilepsy, it’s not advised to watch this video, the same for people suffering migraines and this due to the flashing images.