Interview of Avarice In Audio: one of the most promising new bands at the scene! 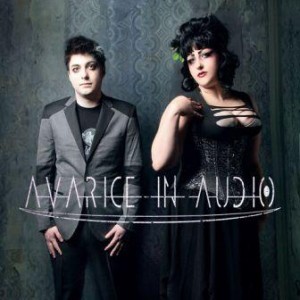 SL: In which way are you familiar with the “Endzeit Bunkertracks”-series and what do you expect from getting featured on compilations, generally speaking?

Gerry: I submitted a song from my first band five years ago for it, when I was first getting started. I unfortunately didn’t get on, but my image was lax, my music was good (I think) then but it wasn’t the level it is now. Being on “Endzeit Bunkertracks” in such a manner is an honour. And with three songs (“Her Fire”, the Suicide Commando Remix and my side project Dream Recall) it’s a great way to show that we’re here to stay.

Jade: I’ve been aware of the compilation series for a fair while now. It’s always exciting to hear the varying featured artists, showcasing their talent. It’s the auditory equivalent to a box of assorted chocolates! As far as expectations go, I expect positive reviews from our submissions and more exposure to the dark electro crowd.

Lawrie: I have been on several of these compilations, but every time is always great, both musically and in a promotional way.

SL: You got the opportunity to make a remix of the absolute master of dark-electronic music: Suicide Commando! What did you try to accentuate on the remix and what has been Johan’s reaction?

Gerry: Our main goal was to add our own flair to it. To make it dancey, add a bit of tragedy to it and accentuate it with Jade’s vocals to add a nice sense of despair to the song. From what I’ve heard from Alfa Matrix, Johan really enjoyed it! But I want the listeners to decide what they think.

Jade: This is a slower track which had potential to be a little more bouncy for playing in a club. Apparently Johan liked the remix, so that’s a big thing for us!

Lawrie: Working with them was and always will be exciting, the only thing we tried to accentuate is more of our own influences really.

SL: 2014 was a very special year for you as Avarice In Audio released its official debut full length. How do you look back at this album and what have been the reactions so far?

Gerry: As a rush to the finish line. We weren’t aware that Alfa Matrix releases are generally 2CDs rather than one. So I had to secure a ton of remixes and get them together before everything was due. Some of the album has shining moments to me, others I wish I had more time to work with and fix up. As soon as “Shine & Burn” was finished, Lawrie and I instantly started work on the second album, so we have lots of time to prepare for the next release. The reception has been fantastic, but we can definitely do better next time around.

Jade: So far all of the reactions have been positive! Looking back, the album is our introduction. We are working on making our next album a little more balanced on our individual ideas and experimenting with our own personal tastes.

Lawrie: We started out fairly raw, but we intend to certainly change things up a lot in the upcoming future.

SL: Tell us a bit more about the Australian electro-underground scene and are you in touch with some of these bands?

Gerry: The Australian underground scene is like paradise to me, but I’m not too knowledgable on the subject. I live on an island off the coast of Victoria and electro music at large isn’t exactly popular, especially our genre. I personally have had great correspondence with Sirus in remixes, Sleepless Droids and vProjekt in collaborations and AR12 for being all round bros!

Jade: The scene does need improvement here! Due to our geographic location, it is a massive effort for our acts to gain exposure and the credit deserved with live shows. Often bands have to travel to the UK, US and Europe to perform, and even then they are support to bigger names. The best we can do is have our tunes played at the scarce clubs we have here in Australia. The bands that I am close to have awesome potential to be a hit performing overseas and some already have bookings in place.

Lawrie: Yes we have, however the Australian scene has never been our aim. We aim for global domination.