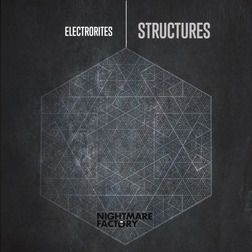 Background/Info: Luca Vollaro is an Italian DJ and producer who’s already been active for 10 years now. After having released an impressive number of EP’s he now unleashes his debut album featuring 2 discs and a total amount of 12 tracks simply entitled “Structure” from 0 to 11.

Content: The sound is clearly driven by techno vibes. The main characteristic of this work is the hard and somewhat bombastic kick, which is hardly resonating throughout the production. The electronic sequences are pretty repetitive, but often reveal a dark and sometimes icy texture.

There for sure is a kind of similarity with industrial production, but “Structures” definitely smells like pure techno music with a minimal approach. That’s more noticeable on the first disc, the second one being even more straightforward-like.

+ + + : The main strength of this album is the global sound production. The music is pretty rudimentary, but carried by an impressive powerful sound. The heavy kick sounds like pure bombast, which matches with some cold sequences. My favorite cut is “Structure 02” where a break progressively moves into a typical climax.

– – – : Aside of the great production, the writing of this kind of music is sometimes too linear and repetitive. There’s not a lot of  variation and too much focus on the heavy kicks.

Conclusion: “Structures” is a damn good illustration of how rudimentary techno music carried by a great production can become successful.